Student chefs from New City College were crowned kings of the barbecue when they won a national competition beating 23 other teams.

Level 3 chefs Sam Paoli and Paulo De La Cruz along with their tutor Jeff Mason, from our Hackney campus, joined up with professionals John Jackaman and Barney O’Connell from the Suffolk-based Infusions Group, and together won the Dirty Dozen Championship Team 2021 accolade.

Calling themselves the Mighty Morphin Pork Arrangers, the chefs were challenged with making two dishes for the Dingley Dell Dirty Dozen competition, which was held at Signature Brewery in Walthamstow and raised around £6,000 for the Over The Rainbow Children’s Charity.

Their dishes of North Carolina smoked pork shoulder in a potato bun with North Carolina coleslaw and vinegar sauce, and homemade black pudding with Suffolk apple crumble, treacle smoked bacon, liquid nitrogen and vanilla ice cream won the most points from the judges.

Sam can be seen in the photo above making liquid nitrogen ice cream!

Jeff said: “Both dishes were sublime, genius, complex and real crowd pleasers. John and Barney spent quality time mentoring Sam and Paulo through all of the various techniques and processes involved in producing and presenting these two dishes. Their passion for food and the amount of research that had been undertaken in the dish development certainly resonated with our student chefs.” 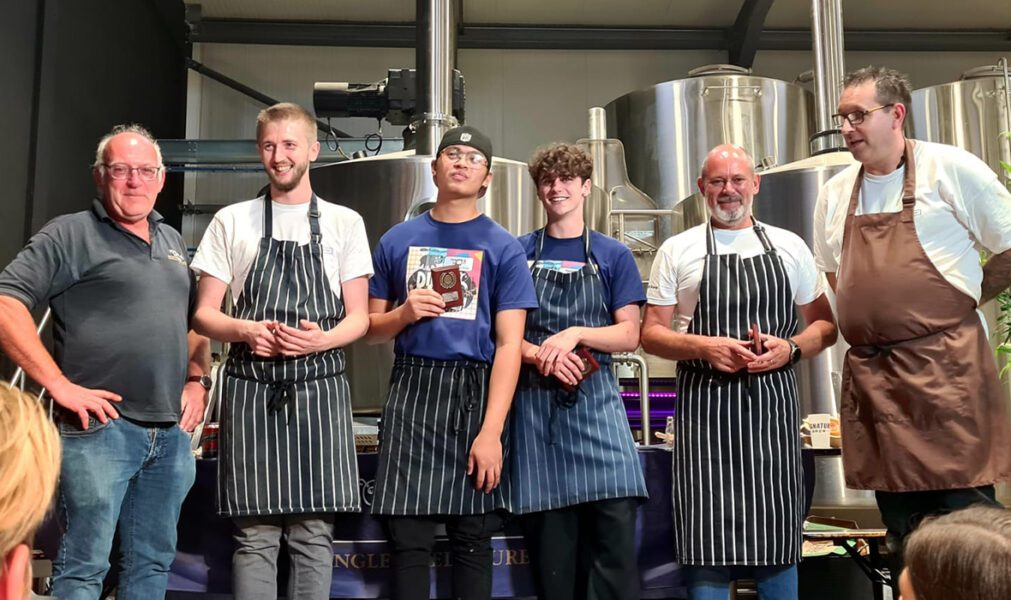 Sam and Paulo agreed that the highlight of their day was when they had to prepare liquid nitrogen ice-cream in front of the audience, which was a complex technique but provided great theatre.

Jeff added: “This was an excellent event for our two students who got to speak to some of the industry greats, be part of an event that raised money for a wonderful cause, and most importantly they got to sample some amazing food.

“I would like to thank Murray Chapman from Passion to Inspire for a magical day, allowing young student chefs the exposure of working with some seriously inspirational and talented professionals – and it was a lot of fun. To win was really unexpected, but what a great start to the academic year for us!”

The event was organised by Murray Chapman who runs A Passion to Inspire, which gives catering students the chance to work with leading chefs in the industry.  Murray said: “The food, the fun, the banter was magical. A massive thank you to everyone who attended and supported.”

The dishes were judged by a celebrity panel including Dan Hawkins from the band The Darkness and the comedian Ed Gamble.  The food was sold to the general public and together, with a charity auction, raised around £6,000 for the Over The Rainbow Children’s Charity.